About the String Quartet 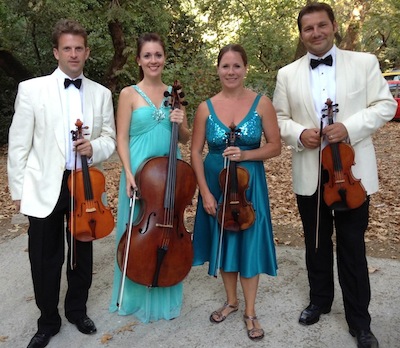 The SGCO String Quartet has its origins in a quartet that was formed for a concert tour to Crete in September 2013. The group performed quartets by Mozart, Haydn, Beethoven, Schubert, Mendelssohn, Ravel, Shostakovich and Janacek. The Quartet was very well received and returned for further tours in September 2014 and 2015.

They made their UK debut at St George’s on 8th March 2014 playing Haydn and Janacek quartets from their Cretan tour. Musicians from the world famous Allegri String Quartet joined them for a performance of Brahms’s melodious masterpiece, the sextet in Bb, to conclude the concert.

The Quartet’s leader is Peter Graham who has been the SGCO’s principal 2nd violin since the formation of the orchestra in 2004. Peter is a member of the Royal Philharmonic Orchestra.

Lucy Curnow is the second violinist and a longstanding member of the BBC Symphony Orchestra.

Dominic Moore, Musical Director and a founding member of the SGCO, is the Quartet’s violist.

Our cellist is Anna Beryl who is a regular guest with the BBC Symphony and BBC Concert Orchestras.

The Quartet can be engaged to give recitals and play at a variety of other events and functions please click here for details.