Having completed both undergraduate and postgraduate studies in musicology at King’s College, Cambridge, Madeleine Venner went on to further postgraduate training as singer and repetiteur at Guildhall School of Music and Drama, where she studied conducting with Sian Edwards. 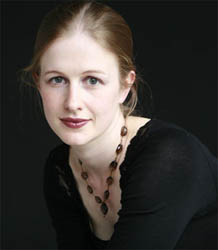 While giving frequent performances as soprano and pianist, Madeleine focused primarily on conducting, quickly establishing a fine reputation as musical director in the fields of choral, orchestral and operatic repertoire.

Madeleine has worked with many of the major English choruses, including the Philharmonia Chorus (for whom she was Associate Chorus Master), the BBC Symphony Chorus and the London Philharmonic Choir. She has worked closely with many chamber choirs, including Londinium (for whom she was Musical Director), one of London’s premier vocal ensembles, and has given workshops and masterclasses throughout the UK and abroad.

Madeleine had a long-standing role as Musical Director of St George’s Chamber Orchestra, with whom she appeared at many London venues, including LSO St Luke’s and Cadogan Hall. She has extensive experience in the field of opera, having been Deputy Music Director for Pavilion Opera and Musical Director of Alternative Opera. She was Chorus Master and Assistant Conductor for London Lyric Opera’s Der fliegende Holländer at the Barbican, and Conductor for the same company’s Fidelio and Die Fledermaus with the Royal Philharmonic Orchestra at Cadogan Hall.

In 2008 Madeleine returned to Cambridge as Director of Music and Director of Studies in Music at Queens’ College, where she resumed some of her many research interests.

In 2012 Madeleine was appointed Choral Director of the Hallé Choir.